The transition from coal is gathering momentum As of late 2018, 30 national governments, 22 sub-national governments and 28 businesses had committed to phase out coal by 2030, under the Powering Past Coal Alliance. Nonetheless, a common critique was that these governments only accounted for about 3% of global coal consumption. But, in the last […]

2020: a major deadline to put ambition back on track According to the Paris Agreement on Climate, by the end of 2020 countries must renew or step up their climate commitments (known as “nationally determined contributions”, or NDCs) submitted in 2015. These must represent a progression compared to previous contributions, and reflect the “highest possible ambition” […]

Alarming scientific data: an unrelenting observation Even the most prestigious scientific publications talk of the “windscreen effect”. You don’t even need to be particularly old to realize: even thirty-something year olds have probably noticed that far fewer insects are squashed onto their car windscreens today than on their parents’ cars when they were children. George […]

Executive summary [excerpt] This report provides an overview of a range of ongoing initiatives to improve governance of ABNJ at the regional level, including: novel modalities, such as the “Collective Arrangement for the North-East Atlantic”, whereby the OSPAR Commission and the North East Atlantic Fisheries Commission (NEAFC) seek to strengthen cooperation between organisations with a […]

Extract The Union has to be able to present itself as a global champion of sustainability, while ensuring that all member states implement a just transition without free-riders, negotiating fair conditions of competition with trade partners and guiding allocation of its development investments outside Europe. Read the letter in ECDPM Great Insights [pp. 36-37]

Key Messages Despite their direct impacts on biodiversity, pesticides are largely governed in the chemicals arena by policies and institutions separate from those governing biodiversity. The Stockholm and Rotterdam Conventions could be an effective avenue for mobilisation and connection of the biodiversity and chemicals regimes.   We identify four ways in which the biodiversity community […]

> All publications
Recent events
December 16, 2019 - Paris High seas, what is at stake?

An event organised by the National Museum of Natural History, with Julien Rochette. Since the middle of the 20th century, human activities on the high seas have continued to increase and threats to their ecosystems and species have increased. Called “high seas” or “international waters”, marine areas beyond national jurisdiction (ABNJ) cover almost half of […]

October 31, 2019 - Paris Adaptation to climate change: let’s give it some political momentum

FULL EVENT – REGISTRATION REQUIRED The drought and heat wave that hit France this summer remind us that the country needs to prepare for the impacts of climate change. Some regional authorities and economic sectors have begun to address this subject, and the State has taken the first steps in this direction. But as the […] 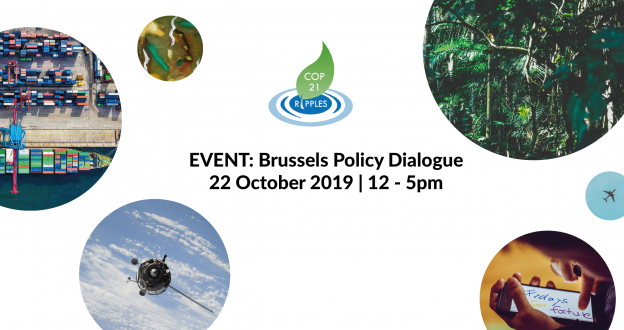 October 22, 2019 - Bruxelles COP21 RIPPLES – What are the key elements of an adequate global response to climate change?

A dialogue organised by Bruegel, Climate Strategies and IDDRI. The objective is to present a synthesis of the key findings of the COP21 RIPPLES project and to focus on technology, finance, industrial transformations and the political economy, which have been identified as key leverage points for triggering transformation. To participate, please contact Marta Torres Gunfaus […]

REGISTRATION Eco-union association, IDDRI, ADEME and FFEM organise the first Blue Tourism Forum at AFD’s offices in Paris. During the day, one conference and three round-table discussions will be organised to present the conclusions of the report “Blue Tourism: towards a sustainable coastal and maritime tourism in regional seas” and to present recommendations and experiences […]

May 28, 2019 - Paris Climate: changing behaviours and lifestyles… a collective challenge

Register [in French] This conference’s programme, organised as part of the 16th International Forum on Weather and Climate, is led by Lola Vallejo and Jean Jouzel.  More information

> All events
We use cookies to guarantee you the best experience on our site, to make statistics, to offer you third-party video services like Youtube, social network sharing. By clicking on validate and closing this banner, you accept the deposit of cookies.AcceptRefuseLearn more